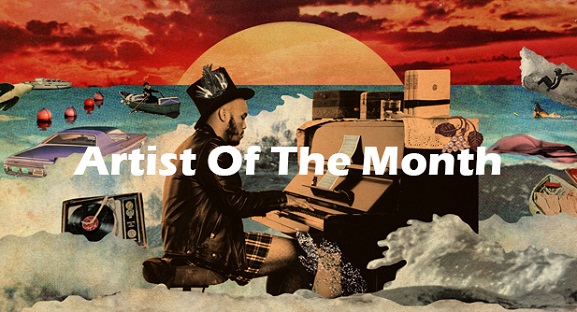 For July’s issue of YANOS’ Artist of the month, we have awarded the title to Anderson Paak. Paak, who broke into the hip hop world in 2012 with his debut album, O.B.E Vol.1, has taken the world by storm.

Raised in California, Anderson Paak started out his musical career playing the drums at his family’s local church. Paak’s first major release was his O.B.E Vol.1 album which was released in 2012 under his stage name Breezy Lovejoy. While working on his debut album, Paak un-expectedly lost his job at a marijuana farm in Santa Barbara, CA, resulting in homelessness for himself, his wife and his young son.

Paak’s first release under his current stage name Anderson .Paak was his Venice album, which, despite widespread critical acclaim, made little mainstream impact. Since releasing his Venice album, .Paak has gone on to release a second album, Malibu, which was released earlier this year and proved to be a commercial success. .Paak’s real name is Brandon Paak Anderson, but as an artist he prefixes his name with a full-stop, symbolising his attention to detail, something which we can wholeheartedly respect here at YANOS.

Aside from his solo career, Paak also makes up one half of NxWorries alongside record producer Knxwledge. Paak also featured on 6 tracks from Dr Dre’s third studio album, Compton, including bangers such as Deep Water and All In A Day’s Work.

With such unique talent we believe that Anderson Paak is more than deserving of this month’s title of YANOS’ Artist of the month, for more information about Paak checkout his website here. If you have your own comments about Anderson Paak that you wish to add or if you have an artist who you believe should be featured next month, then please get in touch. You can get in touch by using our Contact form, or by emailing us at: contact@yanos.co.uk. As always, make sure to check out the Shop before leaving, and keep your eyes peeled for our latest collection which is set to drop within the next month or so… Stay Tuned for more information.